My incursion into the cloud was somewhat accidental, but in the words of Dirk Gently:

“I may not have gone where I intended to go, but I think I have ended up where I needed to be.”

I am here, and I love it here, and here I intend to stay; specifically working on the force.com platform which I believe will soon be the de-facto choice for any kind of timely business application development in the cloud.

I have always enjoyed writing code, and I've been doing it for a long time now and still enjoy it. I have also always enjoyed playing video games and had the fortune to be introduced to them at a (then) very young age, meaning I got to play some true classics including a game I still love to this day called Star Raiders. My love for both naturally led me to want to create games, and for a while I did make them, working mostly on EA titles for handheld platforms and that's when I fell in love with C. After that I spent a while in the online gambling industry, but then made my way back to game development when I started Tin Man Games with my good friend Neil.

No, 'fantasy' does not refer to the dream of becoming millionaires through building iPhone games, but rather what Tin Man are up to now. Since my departure three years ago, their focus has been exclusively on GameBook Adventures, which—if you couldn't tell from the name—are game books that take you on adventures.

Many folk who were older children, or teenagers, during the 80s will remember books like these, for me it was largely the Choose Your Own Adventure series, while for others such as Neil, it was Fighting Fantasy. The Fighting Fantasy experience is what he wanted to recreate for the touch revolution, and the best bit of this story? He's done it; their latest published game is an interactive version of the brand new Fighting Fantasy game book, Blood of the Zombies, which celebrates the 30th anniversary of the series. 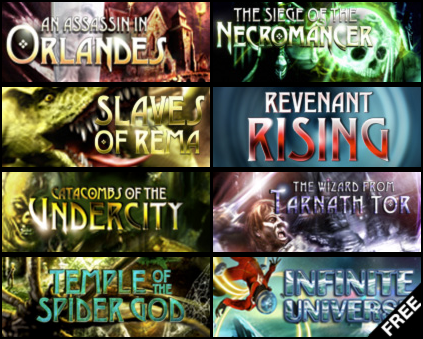 Just some of the titles available now from Tin Man Games

Personally I prefer the more contemporary style of Tin Man's own series of books, and of those my favourite is the third book, Slaves of Rema. Something about the multitude of locations reminds me of playing games like Monkey Island, and the book instills a genuine sense of wonder. They've also published a Judge Dredd book, and a book aimed at the Twilight fans called Vampire Boyfriends with sequels to both on the horizon, plus a whole host of other titles and series which are being announced daily on the lead up to Christmas. Everybody I have shown the games to have become both nostalgic and excited, so please try them out as I'm sure you'd only thank me for it. They're available for both iOS and Android, as well as Mac, PC even the Nook.

So here I am, a little over three years ago I started working at Quattro Innovation and that's how I got involved with force.com in the first place. It's why I love the platform and it's why I've learned some incredibly valuable skills, not only with regards to development but also in producing the best possible experience for a customer. If you're looking for a Salesforce consulting partner then look no further, these are your people and they know what they're talking about.

Today I'm moving on, it is my last day with Quattro and I can't stress enough how great it's been to work with everyone there, but it's time to move on and start something new. I want to get back into my hobby of game development (you can see some of my reasonably recent antics on my long neglected tumblr blog , but I'm also dedicated to the force.com platform, I enjoy it and the community far too much to consider anything else. So now it's time to turn to page 2013, and see what adventure awaits... watch this space.