Update 14/02/2012:
Thank you everybody! We've hit the commit phase! Time for a quick pat on the back, and then we hit the real challenge  — getting the required 100% score. To do this we'll need a few (read: 100) people with some decent reputation on the network, as well as 200 people committed in total, so please commit and check out some of the other sites on the network (see below).

Update 12/02/2012:
I'm not entirely sure where I read that the commit phase requires 300 people to commit to a proposal for it to reach beta, but it appears that the information below is incorrect — it's going to be even harder to reach beta (but achievable nonetheless). Moving out of the commit stage requires a combination of both numbers of users, and users with decent reputation across the Stack Exchange network. This second part is likely to prove to be the tricky part, as only developers are likely to have that reputation at this stage (though some followers have done a good job of earning some rep on Area 51 already). That said, if you're following the proposal you may want to check out the list of sites on the network to see what may appeal to you, there are sites ranging from Bicycles to Parenting, stopping at Philosophy and History along the way. As of the time of this update, we only need one more question to be voted up to a score of 10 to reach the commit phase!

Thanks to wide support so far, my Stack Exchange proposal for a Salesforce site has reached the required number of followers (the image displayed below is generated by Stack Exchange is not always up to date) to progress to the next stage, it requires just 5 more of the sample questions to be up-voted to a score of 10 or more; if you're following the proposal, please vote on some of those questions if you haven't already. I'm stoked that we've made it this far, but the real challenge will be the Commit phase.

So what is the Commit phase? Essentially it's a phase where no less than 300 people must commit to the site, essentially signing their name against the proposal to say that they will use the site if it enters the final proposal phase which is a live beta site. You can read all about the proposal life cycle in the Area 51 FAQ page. The relevant part is:

Commit! When a proposal enters the "Commitment" phase, we will present a petition for the site's creation. Interested users are asked to digitally "sign" the proposal with their full name to help assure that site will have an active community in those critical early days. While your full name is never shown, you may add an optional comment which is displayed alongside your username in the list of committers. To ensure that commitment is taken seriously, you may only commit to three sites at any one time.

I'm am under no false impression with regards to how difficult it may be to reach the magic 300, so I ask for everybody's support here, spread the link far and wide (which I'll put here as soon as we reach commit) and encourage your administrators and developers to join in — once this thing hits beta it will be fully functional, and then the true benefits will become readily apparent. 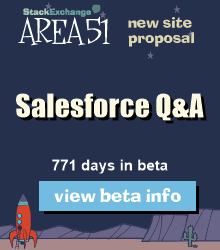 While asking for support for this proposal, I've fielded a lot of questions about why we need yet another another Q&A site, and my argument always boils down to catering for questions which don't fit Stack Overflow, and that Stack Exchange's Q&A format and community-powered moderation is truly second-to-none. With powerful and carefully constructed tiers of community moderation, and gamificaton through the earning of badges, it really shines bright, and it's working so well that even Jeff Atwood knows he can step aside from it with no ill effect.

For me, the real proof that the Stack Exchange model works is that Stack Overflow has pretty much become the default place to go for development problems: it has an Alexa rank of 105 globally which is not something to take lightly. So everybody, please, join the push and let's get this site active together so that the whole Salesforce/force.com community can see, and take advantage of, the benefits and power of this finely crafted model.