When I proposed the Salesforce Stack Exchange site, I did so because I had an inkling it'd be a great fit for the community and would quickly garner some solid support leading to some serious success. The numbers show it's true, the site is receiving 2000 questions per month and (predictably) even more answers, it's become a fantastic resource.

The prime driver for it's success is it's community moderation model, but that model is worthless without a community, and over the years there have been a few runaway champions on the site. In the early days Andy Fawcett looked untouchable, and currently we have no less than 11 users with over 20k reputation:

And now the reason for writing this post... if you've used the site at all then there's absolutely no way you could not have encountered the seemingly-omniscient Brian Fear, a.k.a. sfdcfox (@brianmfear). 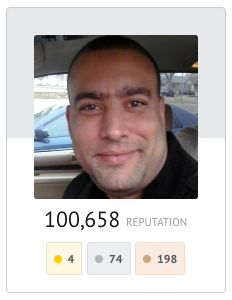 That's a whole lot of points. Even though those numbers are some kind of measure, I'd argue that Brian's contributions are truly immeasurable. He's provided over 2600 answers, and according to the site has reached around 1.8M people. I know he's helped me out on more than one occasion, and I'm sure he's helped many of the people reading this too. Kudos.