Turns out 2018 is flying by, and I've been far busier than in previous years meaning almost all my hobbies have had zero time to spend on them, and unfortunately that includes writing on this blog. To pick up from where I left off, I've continued my use of the Welkin Suite, but primarily on Windows as my default work machine has changed (more on that in the next post, probably).

I hate to be vague, but overall there's not been a whole lot to report. My frustration with the lack of Vim-like commands and being unable to easily edit JavaScript files that don't belong in the project proper (the ones that get compiled into a single file for a static resource) still stand, but by and large the IDE has simply got the job done and stayed for the most part out of the way. This is a bigger accolade than it might first sound, but my point is this: a great tool is a tool that does it's job so well that you simply don't notice it. A drill that works reliably ever time is something you'll use without a second thought, but one with a faulty chuck that loosens up every tenth time you pull the trigger will rapidly become the centre of your attention.

Switching between different machines is a bit awkward, a few keyboard shortcuts aside (at least between Mac and Windows) there are some bigger quirks that do command attention and distract you from the task at hand.

When moving between my Mac and Windows machines I often have to login to my account again, clearly this is a part of the license management and not the core IDE but it's a frustration. The bigger frustration is that The Welkin Suite is opinionated on how you work.

We've all* been in that situation where you've overwritten something on Salesforce by accident, and yes, it can be very annoying, but it's rarely disastrous if you're also utilising version control systems (and you are, right?). The Welkin Suite aims to protect you from doing this, and it does so by not letting you overwrite anything on the server, and insisting that you pull first. 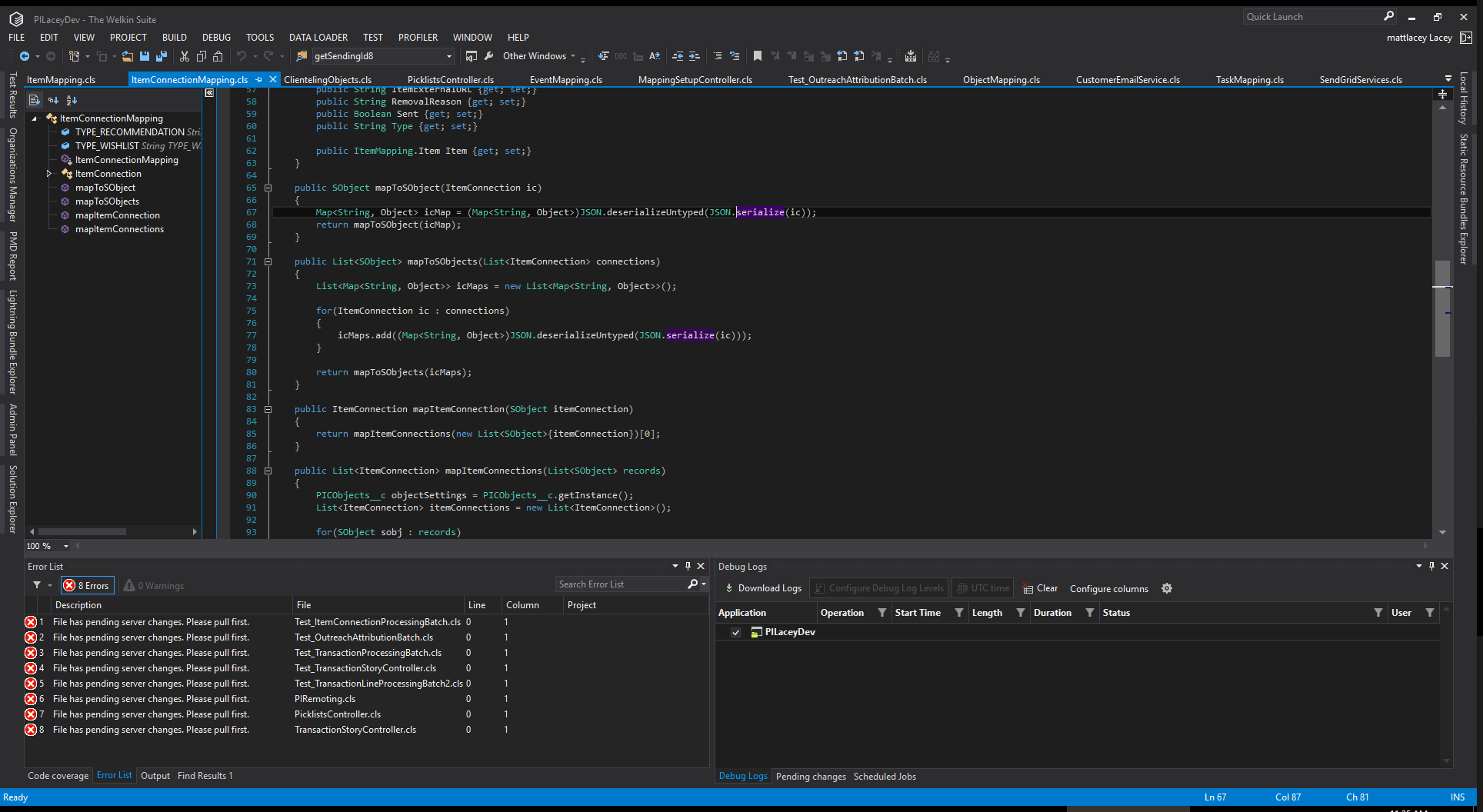 The problem is that I can't find any way to work around this, no option to let me be accountable for my own stupidity. This may not sound like a big deal, but again, I move between machines regularly and mange my source through git, I don't rely on my org to be the source of truth. This is especially true of the code I have in a static resource, for which my flow is often similar to this.

At this point I get stopped dead by the fact that the IDE simply won't allow me to overwrite the resource that's in Salesforce until I first pull it down. I then have to overwrite it locally and push it up again. It doesn't take a lot of time but it is tedious, and it could be a feature many developers appreciate, but it'd be nice to have a 'force push', and allow the developer to make the call rather than the software.

Overall the Welkin Suite is a well maintained and robust IDE that's continually evolving and improving. My biggest pain point is one that's likely to be minor for the vast majority of people, and likely stems from a curmudgeonly attitude I have towards modern computers in general**, and I highly doubt it's an issue if you're using the new-fangled DX workflow.

To quote my last entry on this IDE (albeit the Mac version):

Should you try it? Absolutely. I think it's going to take a while for everyone to find their new IDE of choice and what features will be important may not be things I've covered here, but if you're in the market for new tools I think it's well worth your time to evaluate it.

I still stand by this. It really is a great product available at a good price, and has a very dedicated team behind it.

Do I Recommend It?

Yes. Ok, I'll expand a little: yes I recommend it, please do try it if you're in the market for a Salesforce IDE. I've used it for around half a year at this point and part of the reason I've not yet started on Illuminated Cloud is because it's worked well for me. I am going to try IC purely because I want to be able to share my experiences of that too, but otherwise I'd be more than happy to stick with the Welkin Suite for a long time yet.