Time seems to go by faster and faster as life goes on, and sometimes it's rather shocking to find out how long ago certain events were. For instance, the iPhone is now ten years old.

Even more shocking for me is the fact that it's been five years to the day since I first proposed the Salesforce Stack Exchange site, and although in some ways it feels longer, in many it feels like it was just last year.

I've thanked various people over the years in different posts for contributing to the site and making it a success, and I'd like to thank everybody again right now. Thank you.

They Grow Up Too Fast

During the original Area 51 proposal it felt like we might never get this site up, and it felt like it may never become a success, though today I truly believe it is; not least because I find an answers to almost any Salesforce query I have by visiting that site first before trying other avenues. 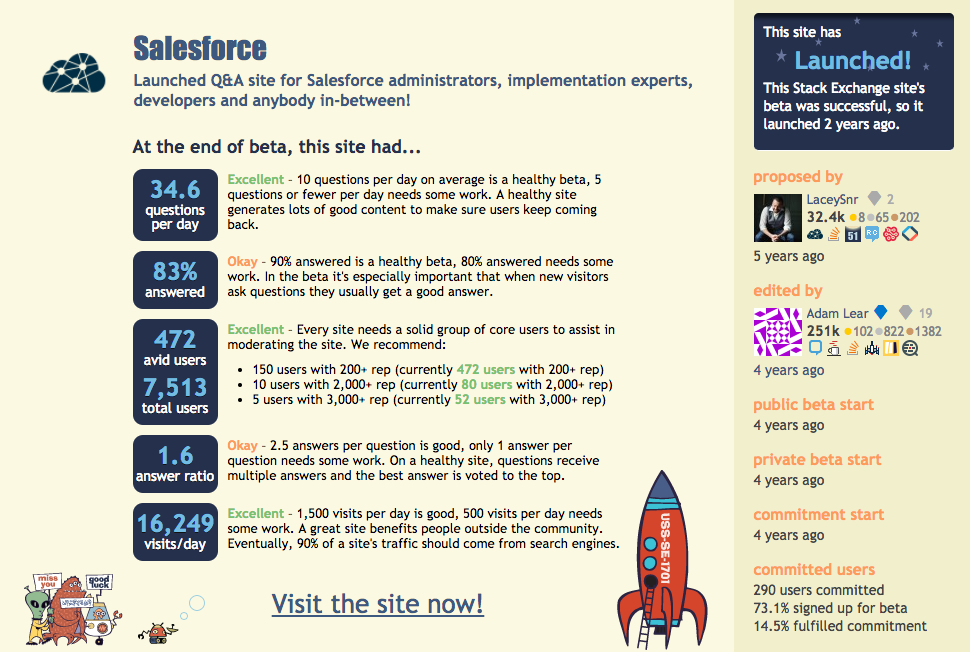 When you look at the stats for the site from the end of the beta period, you can see just how far we've come!

Yes, we do have a never-ending quality battle with new users who don't read about how the site works and assume it's a forum, and others who feel a code dump is a legitimate question (or worse, people clearly trying to out-source their contracting jobs for free), but I think we're getting better at staying on top of it. We get hundreds of new users a month, and thousands of posts, with over 53,000 questions to date. I'm not allowed to reveal exact statistics according to Stack Exchange rules, but I will say that our page views per month have seven digits.

We're down a moderator at the moment after Pat handed in his diamond (he moved on to a new role but is still around and about and connecting to the platform), but there will be an election soon to vote in a new moderator. Just please don't vote in the top users, because I'd hate to lose their contributions (ok you can, but think about it first)! Moderating can take a good chunk of time and I'd hate for certain people to post fewer answers because they're busy trying to work out the issues behind some flags.

Here's To The Next 5 Years!

Once again, thank you to everyone who uses the site, and extra thanks to those who help moderate it, through processing the review queue, editing questions and answers and flagging spurious posts.

I hear people complain about the quality of the content at times, but I'm not always convinced those people realise they can actually do something about it. Get involved.

Comment, vote down, edit and flag if you need to. Community moderation truly is a powerful tool.